The Association of Kinsmen and Kinette Clubs is celebration our 100th Anniversary. Originally formed in Hamilton Ont., by Hal Rogers, it has grown into the preeminent service club in
Canada, with over 500 clubs coast to coast. In our celebrated history we have provided war time relief to Britain, through our Milk for Britain program,

raised in advance of 50 million dollars for the fight against Cystic Fibrosis,

and supported countless community based activities across Canada.

Our history is quite storied:

The Kinsmen Club of Peterborough was formed April 17, 1930 by the District Executive, which was then in Toronto. The charter membership then was 18 members. Charter President was the late Alex Elliot MPP. We have chartered the Kinsmen Clubs of Kingston, Bancroft, Bobcaygeon and Lakefield. The K-40 Club was formed February 17th 1972 with Doug Moscrop as Charter President.

In the last twenty years, the Kinsmen has organized the Kinsmen Soap Box Derby, become a major sponsor of the Festival of Lights, and hosted Peterborough’s Kinsmen Riverside Arts and Crafts Show and Sale.  We were the originating partner with Kinsmen Minor Football, and supported;

The Kinsmen Club of Peterborough are very proud to have established our own bursary program from the funds we developed through our fire works sales..

We are just firing up our 13th Support your Sport silent auction in support of youth sports in Peterborough..through that event we have raised close to $100,00.00.00

Last but not least our Kinsmen Super TV bingo has developed into a significant partnership with communities and other Kinsmen and Kinette Clubs across most of Eastern Ont. Through Super TV Bingo we are raising and distributing $100,000.00 annually to many many Kin community initiatives…

The Kinsmen Club of Peterborough was saddened to hear of the recent Passing of Past District 8 Governor LM Ian McLure HRF. Kin Ian was the driving force in developing Kin Canada’s support nationally on behalf of Cystic Fibrosis. He and Kin Bill Skelly were instrumental in the development our our national C.F. initiative. The Kinsmen Club of Peterborough extends heartfelt regrets to Ian’s family.

McCLURE, Ian Francis Born in Brockville, Ontario September 17, 1930 and passed away in his 90th year, Friday, November 15, 2019. Youngest son of the late William John and Mae Francis McClure, predeceased by all his siblings. Beloved husband of Judith Richey McClure (nee Perks). Loved dearly by his two stepsons Barclay Todd Richey (Larraine) and the late Robert Stephen Richey (Lori) , Judith’s sister Helen Wakeford, niece Martine Briggs, great-niece Genevieve Fincher. Loving grandfather to Todd, David, Stephanie, Kyle and Travis Richey. Loved by great-grandchildren Lucas, Blake, Nathan, Wyatt, Parker, Neila, Taylor and Jaxson. He was instrumental in “Serving the greater need of the community of Canada”. He had 25years of perfect attendance in Kinsman. He was a past governor of district 8 (1968-1969). Past national president of Canadian cystic fibrosis (1976-1978). Life member of Kin Canada (1971). Life member of Kawartha Golf & Country Club (May 9, 2017).He was proud owner of Northview Commerce Court (1981-2012), owned Credit Bureau Lindsay, Credit Bureau of Peterborough, Merchants Credit and Ian F. McClure Holdings Ltd. Keeping with Ian’s wishes cremation has taken place and a private family gathering will be held at a later date. Arrangements entrusted to COMSTOCK-KAYE LIFE CELEBRATION CENTRE, 356 Rubidge Street. In lieu of flowers, memorial donations to Cystic Fibrosis or P.R.H.C – Foundation would be appreciated. Online condolences may be made at www.comstockkaye.com 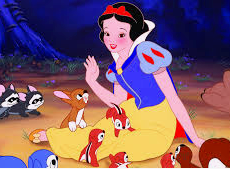 Come one, come all, to the 46th Annual Peterborough Kinsmen Santa Claus Parade to be held on Saturday, December 7th, 2019 commencing from City Hall at 4:45pm.

This year’s parade theme is: A Fairy Tale Christmas

What’s your favourite Fairy Tale or Fairy Tale Movie? Is it Snow White, Cinderella, The Three Little Pigs or may be Beauty and the Beast, Aladdin and Sleeping Beauty.

Applications for this year’s parade can be found below and emailed to kinsmenscp@gmx.com or mailed to the Kinsmen Club of Peterborough to the attention of the Parade Chairman at

Hope to see you there!

PETERBOROUGH – This past winter held an icy grip on the Kawarthas right into May but as the Canada Day long weekend and Summer approaches, Canadians celebrate our confederation with family bbqs, opening up the cottage, dusting off the fishing rod and colourful evening skies with fireworks. (See Contest below)

#1: How Kinsmen help with Education:

The Kinsmen organization has always promoted the value of education, with the Kinsmen Club of Peterborough participating in the Kin Canada bursary program for many years now.

In fact, they began awarding single $1000 bursaries annually to Peterborough and area students three years ago. Eager to expand that initiative to assist more local students, the Kinsmen are establishing a fund that will provide annual $500 commencement awards at each Peterborough and area high school (8 in total) for graduates pursuing post-secondary education.

The criteria will be “a deserving graduate” who has shown leadership qualities while involved in extracurricular activities throughout their high school career, and who has demonstrated strong volunteerism within the Peterborough and area community.”

Reach out to us this week to find out more.

#2: How you can Support Us to Support the Community:

So this year, the Kinsmen Club of Peterborough invites you to come and see us at the Kinsmen Fireworks Trailer at John Dewar’s AutoSource at 1175 Lansdowne Street West in Peterborough, and see what we are all about. Find out how you can support us support the Community!

So, by picking up your Canada Day fireworks at the Kinsmen Fireworks Trailer this week, you will be supporting local students and kicking your summer season off with a bang!

Plus, don’t miss out on your chance to win a $200 fireworks package. Simply visit http://www.kinsmenclubpeterborough.ca/community/ to submit your entry – no purchase required.

Help us help the deserving students, and so much more!! 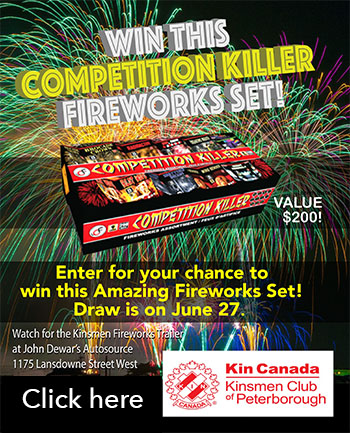 Peterborough Kinsmen Club does it again! 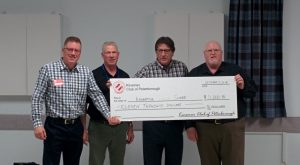 Once again, the members of the Peterborough Kinsmen Club banned together to support their community. Both buy selling Fireworks over the summer of 2018 and work Bingo shifts on Friday nights has resulted in an incredible donation to assist the Kawartha Food Share in purchasing a refrigerated truck. This is a gift that will keep on giving to the community for years to come.

“I can not even believe it!!! $11,000!!! Thank you so very much!!! I truly can not put into words just how much this means to us and how thankful we are for the Kinsmen’s support!

We will definitely organize a photo op when the truck is finished! I will keep in touch!”

Come one, come all, to the 45th Annual Peterborough Kinsmen Santa Claus Parade to be held on Saturday, December 1st, 2018 commencing from City Hall at 445pm.

Applications for this year’s parade can be found below and emailed to kinsmenscp@gmx.com or mailed to the Kinsmen Club of Peterborough to the attention of the Parade Chairman at

Hope to see you there!

Get your fireworks from the Kinsmen Club of Peterborough and help support the Kawartha Food Share. All proceeds to local charity. We are also accepting cash donations and non-perishable food items. 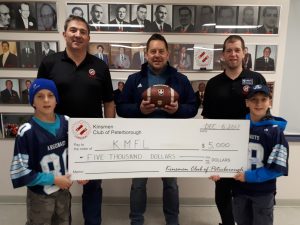 Another donation made by the Kinsmen Club of Peterborough in support of the Kinsmen Minor Football League! 37yrs and counting!

Special Thank you to Delta Bingo for Their Support